By Gabe BraceNovember 9, 2021Hunting
No Comments 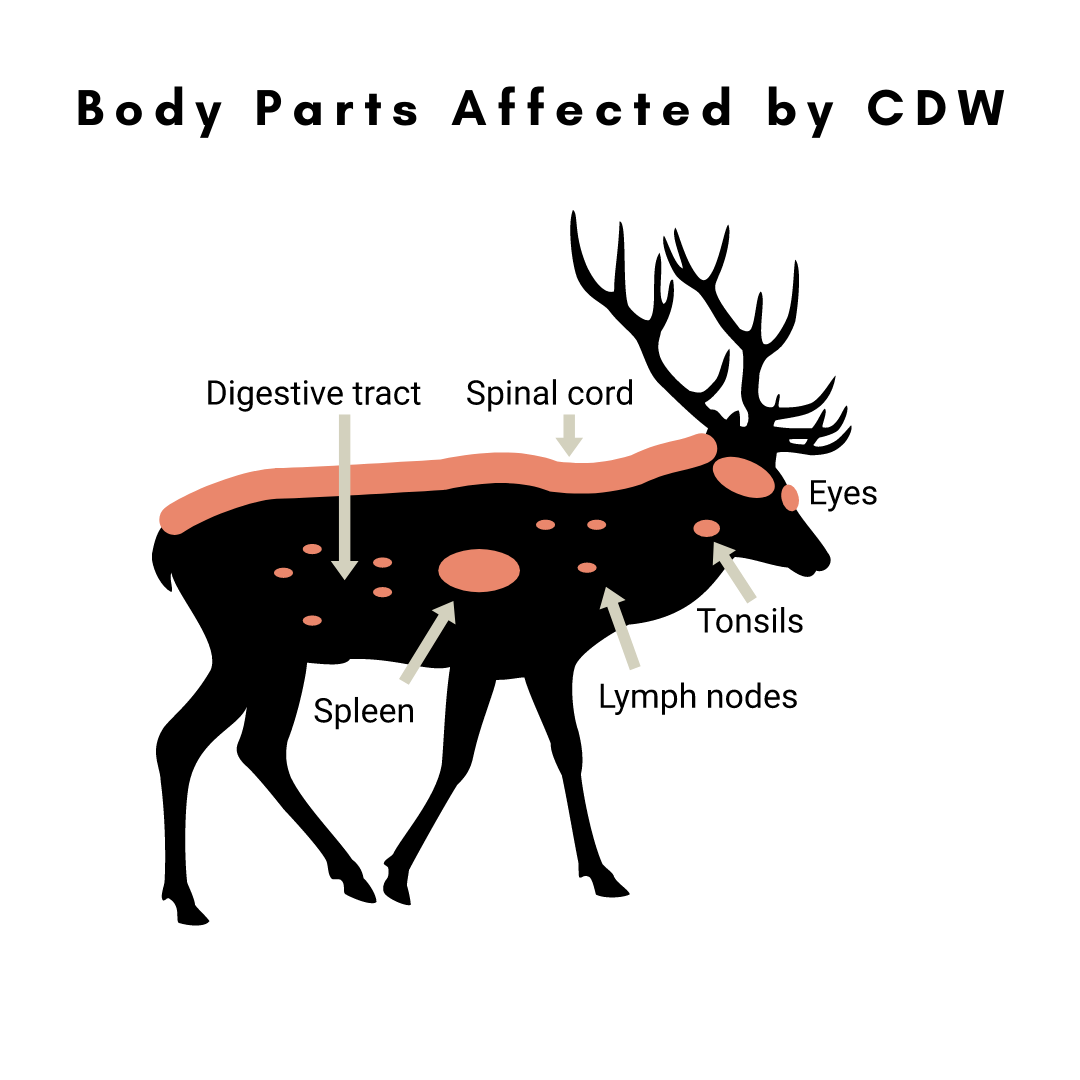 "is a prion disease (a protein that can trigger normal proteins in the brain to abnormally mutate and replicate) that affects cervids in North America, South Korea, and Norway" (CDC, CWD definition).

First cases appeared in Fort Collins, Colorado, in 1960, while a study taking place on Mule deer to help find a solution for the Colorado population not to decline from starvation in the winter. Simultaneously, studies were taking place on domestic sheep with scrapie (a fatal, degenerative disease affecting the central nervous system of sheep and goats) (USDA, scrapie definition). There has not been a definitive explanation of how CWD originated; however, the spread of CWD in North America does support the conclusion that it comes from Fort Collins. In theory, the CDC and USDA believe that scrapie passed from the sheep and mutated into what we know as CWD in cervids to infect the Mule deer that were sharing pens with the sheep at Fort Collins.

The Fort Collins researchers did not know that the newly identified disease was not treatable or curable. Therefore, without knowing the Mule Deer still carried the disease were released back into the wild in Colorado or shipped to breeding farms. It was not until 1981 when a wild elk in Colorado was confirmed to be carrying the disease. Soon more cases were popping up as the disease spread throughout wild western herds of Mule deer, white-tailed deer, elk, and moose, as well as captive animals. Therefore, CWD spread in the following decades from breeding and herds migrating without researchers knowing its survival in the Fort Collins facility. Most cases have appeared in animals that can be traced back to captivity and sold to other farms, released into the wild or held in captivity (i.e. zoos). CWD transmits through breathing, discharge, breeding, and artificial fertilization. Also, if an infected carcass is not disposed of properly, scavengers can consume the infected meat and pass it along.

With locations and year. 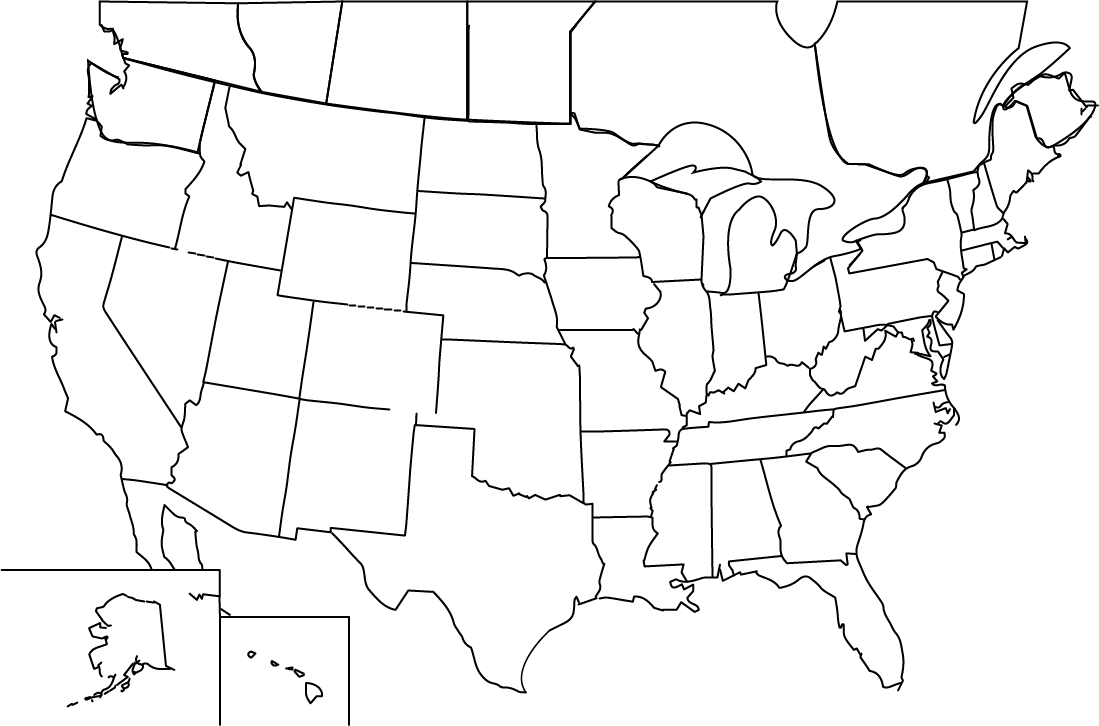 Twenty-six states in America and two regions of Canada are home to CWD carrying white-tailed deer, mule deer, caribou, elk, and moose. Most of these cases originate from captive animals; however, it is much easier to collect the remains of animals in captivity than to study animals in the wild. However, with the movement of animals through farms, connecting the transmission across states is more straightforward, leading to the footprint of infection within neighboring wild populations. Therefore, the question of whether farms should be held responsible for spreading the disease into uncontaminated areas. It is a complex problem to face without disrupting farms and communities that rely on transferring cervids to survive—leading to laws and regulations put in place for farms so that spreading can be limited. For example, Texas has taken the most radical approach to prevent CWD from spreading throughout the state. Therefore, if a farm has a case of CWD, it is immediately withheld from moving any animals. However, this is problematic for both authorities and business owners because researchers have not found a cure, treatment, or straightforward solution to eradicating the disease within a herd—for example, a study on a captive herd where CWD existed left researchers with more questions.

Study: All infected animals were euthanized, the remains and land were burned, the soil was turned and sprayed with poison and was left empty for years. When researchers came back to test the ground, CWD was still present.

The study above led to the questioning of environmental correlation to the spread of CWD. In summary, studies found that prions can thrive in certain soils with minerals instead of dying. Therefore, when another animal comes along and eats the plants or dirt in the area where an infected animal has been, CWD is easily transferrable. In addition, the previously mentioned research led to the inquest of why certain members of a herd are infected while others are left clean. Currently, studies are looking at whether an individual animal’s genome relates to the likelihood of becoming infected. At the moment, there is no proof that genomes and the probability of infection are related.

After the spread of CWD to South Korea and Norway, it is challenging not to consider farms as connections to the expansion of the disease. For example, in 2000, South Korea received 95 elk from an infected farm in Canada, opening the Asian continent for infection. On the other hand, Chronic Wasting Disease strangely appeared in a herd of wild Reindeer in northern Norway. Scientists never found the origin of the disease. However, the theory is that the Reindeer passed through lands with sheep infected with scrapie; this then transmitted to the herd as CWD. It is difficult to agree on a definitive solution when this disease is relatively new, and there is no appropriate way to make a course of action.

The first case of CWD appeared in far West Texas in a wild Mule Deer. With fears of this disease impacting wild game populations throughout the state, hunter participation, and the possible repercussions on the $2.2 billion hunting economy, Texas has developed one of the strictest management plans.

With plans to protect companies and towns that rely on Texas hunting seasons, there have been regulations for Hunters and farmers to hopefully protect captive and wild populations. For a summary of guidelines, please refer below; please visit the Texas Parks & Wildlife CWD page for a full explanation.

These response plans are expensive, and new programs are being passed to help hunting communities survive and receive extra funding for testing cervid populations throughout the United States. Please refer to more information about financial support here and what you can do here.

As deer and other species have been an enormous part of Texas’ and the North American hunters’ experiences, we are responsible for protecting the American treasured hunting season. If Chronic Wasting Disease continues to go unanswered, the population will decline along with your yearly opportunity to get outside and refresh the freezer for the following year.